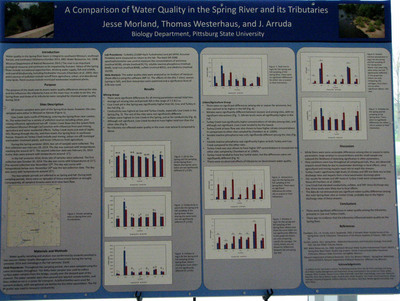 Water quality in the Spring River basin is integral to southwest Missouri, southeast Kansas, and northwest Oklahoma and is an important ecological resource that continues to be impacted by humans. Values of the Spring River system include recreational opportunities, drinking water supply, fish and wildlife, and overall biodiversity, including freshwater mussels. Non-point sources of pollution include runoff from agriculture, urban, and abandoned mine lands while point sources primarily includes municipal wastewater treatment plants. The purpose of the study was to assess water quality differences among the sites and the influences the tributaries have on the main river. In 2014, as part of two separate courses, water samples were collected from bridges at seven sites, including the Spring River and its tributaries. Some variables were measured in the field and others in the lab. The variables measured were grouped into the categories of general chemistry, mining, and urban/agriculture. The data were analyzed as an analysis of variance. Of the 10 water quality parameters, five showed some statistically significant effect related to site or season. In the general chemistry category, there were no significant differences for site, season, or site and season among the variables of dissolved oxygen, temperature, and turbidity. In the mining category, there were significant differences for site and season for pH, conductivity, and sulfates, while total iron showed no significant difference. In the urban/agricultural, nitrates showed significant differences only for sites. Ammonia had no significant differences for site or season. Turkey and Cow Creek were most different from the other sites. Cow Creek was significantly higher in conductivity, sulfates, and soluble reactive phosphorus. Turkey Creek was also higher than the other sites in soluble reactive phosphorus and highest in nitrates. These differences could be due to wastewater and local impacts. When concentrations were higher in the tributaries, there was no significant effect on the main river sample site below the tributary. The lack of effect is likely due to smaller discharges of the tributaries compared to the large discharges of the main river. In conclusion, there were significant differences in water quality among the tributaries, in Cow and Turkey Creeks. There was no evidence that the tributaries influenced water quality on the Spring River.