Where Did Six Million People Go? 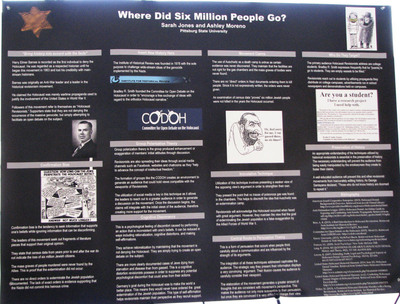 Six million Jewish people were killed in one of the worst genocides in human history. The Holocaust subjected them to abuse and terror until they met their untimely demise through gas chambers, disease, starvation or maltreatment. The controversy surrounding the Holocaust reached a new level in 1963 when Harry Elmer Barnes began publishing materials that claimed the Holocaust to be a hoax by the United States to justify their involvement in World War II. Over the years, the Holocaust revisionism movement has developed a faithful following of young individuals that have succumbed to the persuasion and group tactics utilized by leaders to gain followers.

There are three ideals that serves as the basis for this movement: the lack of exact orders in German documents that call for the extermination of the Jewish population, the denial of Auschwitz as a death camp and discrepancies in census data from years before and after the war. The objective of this presentation will be to analyze the denial of the Holocaust from a social psychological perspective in order to gain a better understanding of how the leaders of this movement have assembled such a loyal following. The social psychological concepts and theories that serve to provide an explanation of this movement include: confirmation bias, inoculation technique, cognitive dissonance theory, the central route to persuasion theory and group polarization theory.

Although the ideas perpetuated by the followers of this movement are not accepted by mainstream historians; those who do accept these ideas as truth are fiercely faithful to them. An appropriate and accurate understanding of the methods utilized by leaders of these types of movements to gain followers, and in turn momentum, is necessary to ensure that the audience will prevent momentum for future historical revisionist ideas that seek to alter history. As George Santayana declared, ‘Those who do not learn history are doomed to repeat it.”