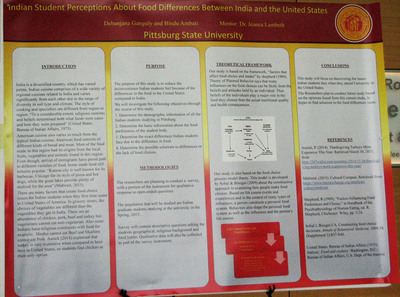 India is a diversified country, which has varied palate. Indian cuisine comprises of a wide variety of regional cuisines related to India and varies significantly from each other due to the range of diversity in soil type and climate. The style of cooking and specialties are different from region to region.

American cuisine also varies so much from the typical Indian cuisine. American food consists of different kinds of bread and meat. Most of the food made in this region had its origins from the local fruits, vegetables and animals found in this region. Even though, arrival of immigrants have paved path to different varieties of food, home made food still remains popular. "Kansas city is well known for its barbecue, Chicago for its pizza and hot dogs, while the great lakes provide plenty of seafood for the area" (anonymous, n.d., 2015).

There are many factors that create difficulties for Indian students in finding the right food when they first time come to the United States. In grocery stores, vegetables are available but Indians do not get the kind of vegetables they get back in India. There are abundance of chicken, pork, beef and turkey but vegetarians cannot eat non-vegetarian. So they rely on different varieties of vegetables. Also Indians have religious constraints in food such as Hindus cannot eat Beef and Muslims cannot eat Pork. Turkey is very expensive here in the United States, so students find chicken as their only option.

The purpose of this study is to reduce the inconvenience Indian students feel because of the differences in the food in the United States compared to India.

We will investigate the following objectives through the course of this study.

1. Determine the demographic information of all the Indian students studying in Pittsburg.

2. Determine the basic information about the food preferences of the student body.

3. Determine the exact differences Indian students face due to the difference in food.

4. Determine the possible solutions to differences or the Jack of food choices.

Therefore, our study will focus on finding solutions for the problems that are discussed above and our research will be a qualitative research. The proposed methodology would be collecting descriptive information about Indian graduate students here. Researchers will study further on the options available here that can solve our dilute the food differences issue.