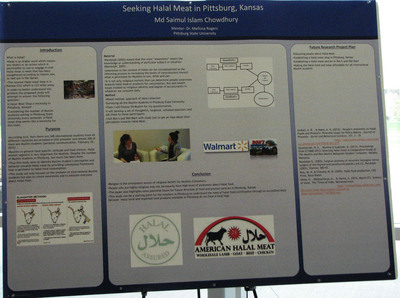 What is Halal? Halal is an Arabic word which means any object or an action which is permissible to use or engage in and Halal meat that has been slaughtered according to Islamic law, as laid out in the Quran. A lot of international students have to struggle with their day to day life but having to worry about their food especially in a place which is considered to be the biggest multi-cultural country in the world, would be last thing in their mind. The nearest Halal meat shop is in Kansas City which is 123 miles away. Students who don’t have a car are having a hard time getting Halal meat which is affecting their studies. In order to better understand this problem the proposed study will attempt to answer the following question: Is Halal Meat Shop a necessity in Pittsburg, Kansas?

Every Muslim needs to consume Halal food and considering the number of Muslim students coming in Pittsburg State University every semester, a Halal meat shop seems like a necessity for this town. According to A. Hurt there are 548 international students from 45 different countries enrolled in this semester and almost 200 of them are Muslim students (personal communication, February 25, 2015). The primary reason Muslims do this is because they believe that God has instructed them to do so. But it is also scientifically proven that Halal meat or Halal food in general is healthier than the meat we buy from the market. So if food meats these criteria’s, then it is considered acceptable to eat or Halal in practice this means:

So Halal is not as simple as eliminating pork from the menu.

It is not only religious motives that can determine people awareness towards halal food or products for consumption, but also health issues related to religious identify and degree of acculturation in whatever we consume daily. Thus, for example, it is important to ensure that the meat comes from a healthy animal so that people can be healthy. It is true that a lot of these modern diseases and illness is attributable to poor nutrition and unhealthy meat that people eat every day. This is closely related to argument for halal consumption since the primary aim of Allah on halal is to ensure healthy life for people. As such, the university authority and retail stores like Ron’s and Walmart should consider providing all kind of Halal meat.

In this study I emphasize the necessity of a Halal meat shop in Pittsburg, Kansas. To achieve that goal I have to collect data. As I have chosen qualitative method of data collection, I will choose a sample of participants. I will choose 20 Muslim students from the MST department of Pittsburg State University. I will develop a set of thoughtful, targeted, unbiased questions and ask the participants. Thus, data was collected through personally administered questionnaires.