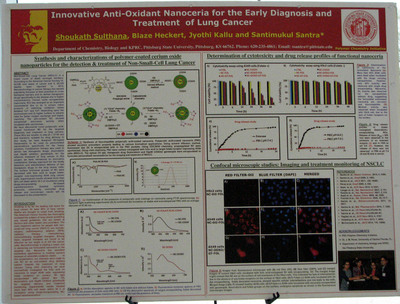 Cerium oxide nanoparticles (nanoceria, NC) has emerged as an important nanomaterial due to its 1) unique redox property of switching oxidation states between Ce3+ and Ce4+ depending upon the environment and 2) higher surface to volume ratio for better oxygen exchange and higher reactivity. Over the past decade, these exceptional redox properties of NC were extensively used in various biological studies including neuroprotective, anti-inflammatory, anti-aging, cardio protection and other oxidative-stress related complications. In addition, the anti-oxidant NC showed exceptional anti-tumor activity when incubated with carcinomas. According to the American Cancer Society 1,665,540 new cases of cancer and 585,720 deaths were reported in 2014. Non-Small-Cell Lung Cancer (NSCLC) is a major cause of death amongst smokers. Nanotechnology in cancer therapy has earned popularity because of their potential to cross biological barriers and to deliver therapeutic drugs specifically to the disease site in higher concentrations.

We have discovered novel polyacrylic acid-coated functional NC for the targeted diagnosis and treatment of lung cancers. In this study, we have designed NC-based theranostics to be used as personalized nanomedicine specifically for the heavy smokers. Combination therapy was used to deliver two therapeutic drugs, doxorubicin and Hsp90 inhibitor Ganetespib for the effective treatment of lung cancer. In this project, we have introduced an innovative nanotechnology for the timely detection and simultaneous delivery of two therapeutic drugs to the lung cancer cells. The surface functional groups of NC were decorated with folic acid to target folate-receptor over-expressing A549 lung cancer cells. Experimental results showed more than 80% cell death within 24 h of incubation using drugs-encapsulating NC-based nanotheranostics. Detailed synthesis protocols, cytotoxicity, controlled drug release and microscopic results will be discussed in this presentation.