The Roles of Perceptual Load and Dilution in Visual Selective Attention 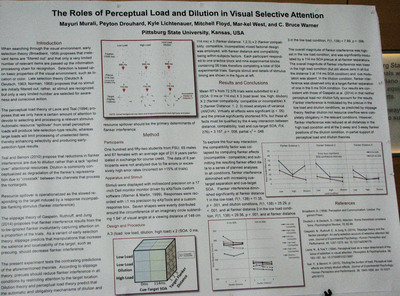 Perceptual load theory (Lavie & Tsal, 1994) proposes that our attentional selection is more efficient under conditions of high perceptual load due to spare capacity being insufficient to “spillover” and fully process nontarget flankers. Tsal and Benoni (2010) propose that reductions in flanker interference are due to dilution rather than a lack “spilled over” attentional resources. Gaspelin, Ruthruff, and Jung (2014) have suggested that neither perceptual load theory nor dilution adequately explain the effects of nontarget stimuli on flanker interference. Their “slippage” account proposes that a visually-similar, to-be-ignored flanker involuntarily captures attention on a proportion of the trials.

Participants viewed a fixation display consisting of a center dot surrounded by a circular array of 7 dots for 1000 ms. In the low load condition, two of the dots on the circle were replaced by the letter T rotated 90 deg clockwise or anticlockwise. The target was marked by a cue consisting of four dots. The unmarked flanking T could be placed 1-3 positions away on the circle, and could be rotated in the same direction of the target (compatible) or in the opposite direction (incompatible). In the high load and low mirrored L shapes, which were a contrasting green in the dilution condition.