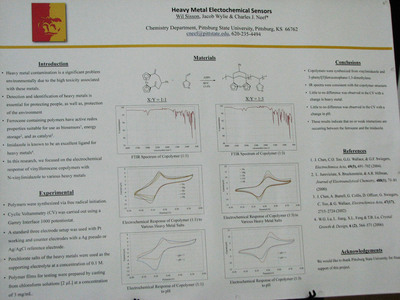 Heavy metal contamination is a significant problem environmentally due to the high toxicity associated with these metals. Various metals such as lead, cadmium, arsenic, and mercury have been accidently released into the environment from mining operations. This problem can be seen in Picher Oklahoma which was designated a superfund site in 1983. Due to the heavy mining of this area and lack of oversight, high levels of lead and zinc have been released into Tar Creek.

Detection and identification of heavy metals is essential for protecting people, as well as, protection of the environment. Current methods of identification include atomic absorption spectroscopy, inductively coupled plasma atomic emission spectrometry, and the use of piezo-electric quartz crystals. However, these methods require expensive equipment and are often time-consuming. Another method of heavy metal detection often used is fluorescence spectroscopy. In fluorescence spectrum. While fluorescence is simpler and less expensive, it is ineffective for metals, such as lead or copper, which act as fluorescence quenchers.

Previous work within our labs has focus on copolymers of a novel ferrocenophane diene with 4- vinyl pyridine which exhibited two redox waves in the CV when the supporting electrolyte included heavy metals such as lead or cadmium. However, these second redox waves were small suggesting weak interactions of the metal with the pyridinyl moiety. Currently, we are working with copolymers of the ferrocenophane diene with vinyl imidazole. Since imidazoles are known to interact stronger with heavy metals, we anticipated stronger signals in the CV. We will report the characterization and heavy metal testing of these novel ferrocene-imidazole copolymers.