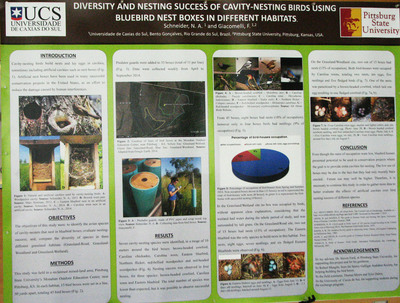 Cavity-nesting birds build nests and lay eggs in cavities, sometimes including artificial cavities such as next boxes. Artificial next boxes have been used in many successful conservation projects in the United States, as an effort to reduce the damage caused by human interferences. The objectives of this study were: to identify the avian species of cavity-nesters that nest in bluebird boxes; evaluate nesting-success; and, compare the diversity of species in three different grassland habitats (Grassland-Road, Grassland Woodland and Grassland-Wetland). This study was held in a reclaimed mined-land area, Pittsburg State University’s Monahan Outdoor Education Center, near Pittsburg, KS. In each habitat, 15 bird boxes were set in a line, 50 yards apart, totaling 45 bird boxes. Predator guards were added to 33 boxes (total of 11 per line). Data were collected weekly from April to September 2014. Seven cavity-nesting species were identified, in a range of 10 meters around the bird boxes: brown-headed cowbird, Carolina chickadee, Carolina wren, Eastern bluebird, Norther flicker, red-bellied woodpecker and red-headed woodpecker. Nesting success was observed in three boxes, for three species: brown-headed cowbird, Carolina wren and Eastern bluebird. The total number of species was lower than expected, but it was possible to observe successful nesting. From 45 boxes, eight boxes had nests (18% of occupation); however only in four boxes birds had nestlings (9% of occupation). In the Grassland/Wetland site no box was occupied by birds, without apparent clear explanation, considering that the wetland had water during the whole period of study, and was surrounded by tall grass. On the Grassland/Road site, two out of 15 boxes had nests (13% of occupation). The Eastern bluebird was the only species to build nests in this habitat. Two nests, eight eggs, seven nestlings, and six, fledged Eastern Bluebirds were observed. On the Grassland/Woods site, two out of 15 boxes had nests (13% of occupation). Both bird-houses were occupied by Carolina wrens, totally two nests, 10 eggs, five nestlings and five fledged birds. One of the nests was parasitized by a brown headed cowbird, which laid one egg resulting in one fledged cowbird. Even though the rates of occupation were low, bluebird houses presented potential to be used in conservation projects were the goal is to provide extra cavities for nesting. The low use of boxes may be due to the fact that they had only recently been erected. Future use may well be higher. Therefore, it is necessary to continue this study in order to gather more data to better evaluate the effects of artificial cavities over bird nesting success of different species.