Media effect on the 2014 Ebola Outbreak 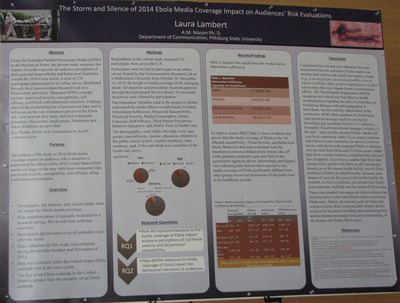 By late October 2014 eight confirmed cases of Ebola had been or were being treated within the United States. During the time of Ebola’s amplification period in the media an online survey hosted through the Department of Communication’s Communication Research Lab was distributed. Data was collected between October 4, 2014, and December 5, 2014. Participants included 327 individuals (male n=117, 36%; female n=210, 64%) from across the United States. The extended parallel processing model (EPPM) serves as the theoretical frame to examine the relationships between media exposure and audience perceptions of Ebola’s threat severity and their personal susceptibility. Additional measurements include the public trust in the U.S. public health infrastructure, perceived their person effects, and individual behavioral intentions. Significant differences were found such that audiences who reported higher levels of exposure to media reports about Ebola were more likely to perceive an elevated level of personal susceptibility and increased threat severity. This project outlines the research limitations, discusses applied implications for public health practitioners, and includes future directions for additional exploration.