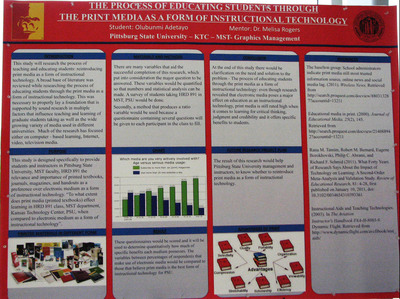 In educational sector as of today, there are many things interrupting students to focus on their studies when they use different media, such as video games, Internet, social media and televisions, as a form of instructional technology. To some extent, students can control themselves by ignoring distractions that comes from electronic media while some are tempted to do other things instead for their primary focus. It is common knowledge that technological advancement in instructional technology has direct effect on learning when it comes to critical thinking, judgment and credibility.

This study will research the process of teaching and educating students: reintroducing print media as a form of instructional technology. A broad base of literature was reviewed while researching the process of educating students through the print media as a form of instructional technology. This was necessary to properly lay a foundation that is supported by sound research in multiple factors that influence teaching and learning of graduate students taking as well as the wide growing variety of media used in different universities. Much of the research has focused either on computer-based learning, Internet, video, television media.

There are many variables that aid the successful completion of this research, which put into consideration the major question to be answered. These variables would be quantified so that numbers and statistical analysis can be made. A survey of students taking HRD 891 in MST, PSU would be done. Secondly, a method that produces a ratio variable would be used because a questionnaire containing several questions will be used to determine quantitatively how much of specific benefits each medium possesses. The variables between percentages of respondents that make use of electronic media would be compared to those that believe print media is the best form of instructional technology for PSU.

At the end of this study there would be clarification on the need and solution to the problem - The process of educating students through the print media as a form of instructional technology: even though research revealed that electronic media poses a major effect on education as an instructional technology, print media is still the best when it comes to learning for critical thinking, judgment and credibility and it offers specific benefits to students.