Framing Fracking: Media representations of the processes, voices, and uncertainties of industrial practice 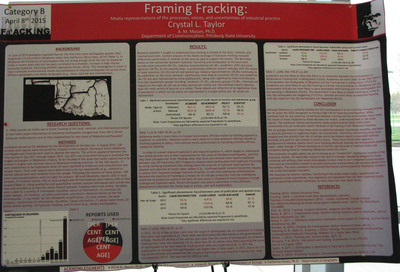 In June of 2014, geologists reported that, for the first time, more earthquakes greater than magnitude 3.0 occurred in Oklahoma than in California (Terry-Cobo, 2014). In Oklahoma, the frequency of earthquakes that are strong enough to be felt has increased 44 times in recent years and this has been correlated to a dramatic increase in high-volume, horizontal hydraulic fracturing (HVHHF) operations (Hume, 2014).

The purpose of this research is to (1) to determine the distinct attributes of tracking as it is framed at the local, national, and international levels; (2) to understand the image restoration strategies employed by the oil and natural gas industries; and (3) to further analyze the stakeholder processes involving policy makers and community members to date. The investigation is novel in that it analyzes environmental media representations of induced earthquake risk across three different geographic and media landscapes (e.g., local, national and international). A total of 169 print news reports were included for analysis: 48 local/Oklahoma reports (30% of total sample). Differences in the types and sources of information were found between the local, national and international framing of the connection between high-volume, hydraulic fracturing (HVHHF). Interpretation, discussion and implications are provided.

Although Oklahoma is currently leading the US in earthquakes it is not currently included among the 16 states the USGS recognizes as having a high risk for hazards earthquakes. Oklahoma media has a history of underreporting the voices of victims suffering from environmental contaminations date back to the Tri-State Mining practices in NE Oklahoma, and now as Oklahoma becomes more familiar with shaky ground. While scientists look for any potential connections between tracking and the environment many times the voices of those impacted by these decisions are muted, underrepresented in the news reports. The emotional trauma and economic losses experienced by those within the community has yet to become salient attribute of the framing of the Oklahoma fracking.

The economics of public safety has yet to emerge as an “investment” opportunity outside of the insurance market. Of noticeable concern is the lack of strategic messaging designed to foster collective self-efficacy that would allow people to know what to do in response to earthquakes? Instructional information related to personal earthquake preparedness was virtually absent from the sample. The most consistent instructional information communicated to Oklahoma residents was to buy earthquake insurance.

In Oklahoma, the stakeholders remain divided. Activists want to ban tracking while other argue for tougher regulation, such as seismic monitoring near injection wells and mandatory data sharing. Donald Clarke, who teaches at the University of Southern California, said a key to preventing earthquakes appears to be to controlling the flow and pressure of the water as it is being injected. The challenge is determining where it’s safe to inject large volumes of wastewater. “There are places that are safe to do this,” he said. “Figuring out where those places are is probably one of the most important pieces of the puzzle” (Simpson, 2014).