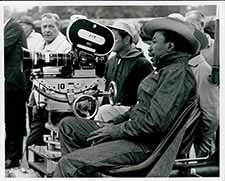 Gordon Parks (1912-2006) was an American photographer, movie director, writer, musician, and artist who first rose to prominence in the 1940s for American documentary photojournalism dealing with civil rights, African-Americans, and poverty.

Parks was also the first African-American to produce and direct major motion pictures, including the creation of the “blaxploitation” genre, particularly with the movie Shaft, in 1971, which he directed. In 1969 Parks filmed the movie The Learning Tree near his home of Fort Scott, Kansas, based on his 1964 novel of the same name.

Printing is not supported at the primary Gallery Thumbnail page. Please first navigate to a specific Image before printing.