A General Description of the Southeastern Kansas Coal Field 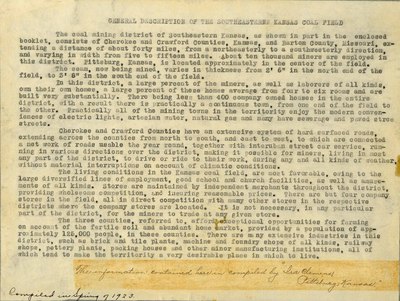 The coal mining district of Southeastern Kansas, as shown in part in the enclosed booklet, consists of Cherokee and Crawford Counties, Kansas, and Barton County, Missouri, extending a distance of about forty miles, from a northeasterly to a southwesterly direction, and varying in width from five to fifteen miles. About ten thousand miners are employed in this district. Pittsburg, Kansas, is located approximately in the center of the field. The seam, now being mined, varies in thickness from 2' 6" in the north end of the field, to 3' 6" in the south end of the field. In this district, a large percent of the miners, as well as laborers of all kinds, own their own homes, a large percent of these homes average from four to six rooms and are built very substantially. There being less than 400 company owned houses in the entire district, with a result there is practically a continuous town, from one end of the field to the other. Practically all of the mining towns in the territority [sic] enjoy the modern conveniences of electric lights, artesian water, natural gas and many have sewerage and paved streets. Cherokee and Crawford Counties have an extensive system of hard surfaced roads, extending across the counties from north to south, and east to west, to which are connected a net work of roads usable the year round, together with interuban [sic] street car service, running in various directions over the district, making it possible for miners, living in most any part of the district, to drive or ride to their work during any and all kinds of weather, without material interruptions on account of climatic conditions. The living conditions in the Kansas coal field, are most favorable, owing to the large diversified lines of employment, good school and church facilities, as well as amusements of all kinds. Stores are maintained by independent merchants throughout the district, providing wholesome competition, and insuring reasonable prices. There are but four company stores in the field, all in direct competition with many other stores in the respective part of the district, for the miners to trade at any given store. The three counties, referred to, afford exceptional opportunities for farming on account of the fertile soil and abundant home market, provided by a population of approximately 125,000 people, in these counties. There are many extensive industries in this district, such as brick and tile plants, machine and foundry shops of all kinds, railway shops, pottery plants, packing houses and other minor manufacturing institutions, all of which tend to make the territority [sic] a very desirable place in which to live. [Handwritten at the bottom of the typewritten document] "The information contained here is compiled by 'Ira Clemens, Pittsburg, Kansas.' Compiled in Spring of 1923."

The reproduction of images from the Pittsburg State University Special Collections & University Archives requires permission and possible payment for use in both digital and printed works, including books, articles, films and television; and for advertising or commercial purposes. Please see the "Application for Permission to Publish, Quote, Broadcast, or Exhibit Items from the Special Collections & University Archives" in the FAQ for more information. Those using these images and texts assume all responsibility for questions of copyright and privacy that may arise.